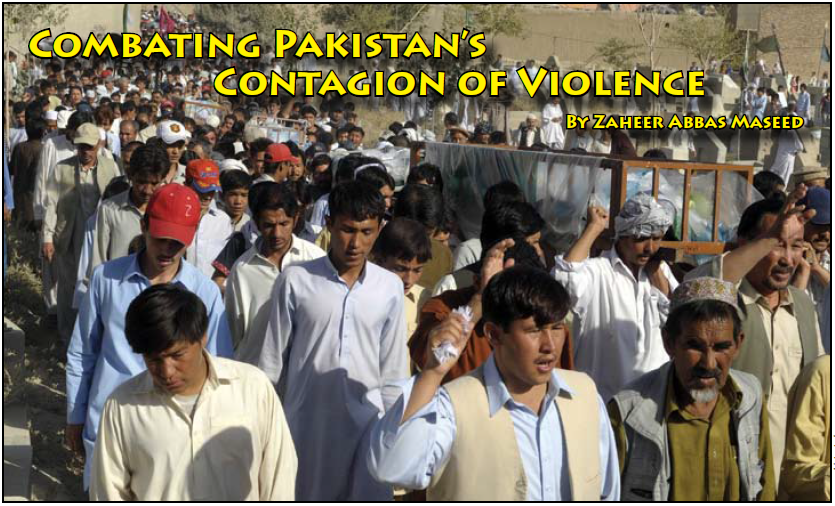 A mass funeral for some of the 2,090 Pakistanis killed in sectarian violence since 2008.

The word “contagion” literally means transmitting a disease from one person to another through close contact. I am using this term deliberately to reflect my understanding of violence and how it is spread. This understanding has been developed based on my experience with Cure Violence, a U.S. NGO working on issues of violence in the United States and globally.

The Cure Violence model employs a public health approach. Cure Violence considers all forms of violence—psychological, emotional, physical, and sexual—as a kind of contagious disease or epidemic. The organization believes that violence could be effectively prevented and controlled if the same approach to confront an epidemic was adopted in communities disproportionately affected by violence. The model suggests that in societies where violence is normalized by regular exposure, experience, glorification, promotion and desensitization, it is likely people will become less immune to violence and hence more receptive to its infection.

When I look at both the history and current situation of my native Pakistan, the above approach not only seems a convenient analogy but also an effective and innovative approach to address and prevent violence. Pakistan has been exposed to megascale violence since it was founded in 1947.

The current terrorism and instability in Pakistani society is not merely the result of Pakistan’s participation and so-called “cooperation” with the United States in the “war on terror” (since 9/11), but rather the logical outcome of society’s continued experience of violence and exposure to it. It is because of my country’s history of using violence at home—and in the region—that a new culture arose where violence became a social norm, a mindset shared by both the state and society at large.

This deadly epidemic can only be contained and reversed if the same approach to combating epidemics is applied. Cure Violence designed a three-pronged strategy in which all components are intended to be implemented simultaneously.

In the case of Pakistan, violence interrupters could include ex-jihadis, clerics and activists of different religious, ethnic, and political groups—all who may have perpetrated or condoned violence in the past and now are living peaceful or at least neutral lives. Others may be identified among former dacoits and runaway criminals living in tribal areas out of reach of the police. These kinds of people will need specialized trainings, behavior change programs, counseling, and, of course, being cleared of all charges of perpetrating violence. It is precisely because of their pasts that they might be seen as more “credible messengers” than NGO field workers and government workers doing outreach to militants. Nevertheless, violence interrupters need to be monitored, supervised, and receive rigorous training on a regular basis so they might positively influence others (rather than relapsing into violence when exposed to it in the field.)

Just as healthy people are advised to stay away from a patient suffering from a contagious disease, the second component is preventing people and communities from being exposed to violence. Individuals and communities involved in violence should be kept away from people and areas not affected. It also calls for stopping both the perpetrator from committing further violence and the victim’s family, friends and relatives from retaliating in an act of revenge. Success is only possible with the help of the community. To prevent retaliation, violence interrupters must know how to mediate between the two fighting groups at the scene of an incident and immediately after the conflict.

The final component is building resilience and increasing community immunity— read resistance—to violence. Such a strategy needs ambitious and targeted efforts by the government, media and civil society to change community norms and behavior about violence and its use. We are not limited to stories and paradigms of violence. We have a history of leaders who believed in the possibility of peace. Leadership messages from the struggles and autobiographies of peacemakers and political leaders like Khan Abdul Ghaffar Khan, Mahatma Gandhi, Martin Luther King, Jr., Nelson Mandela and most important the holy saints of Indo-Pak like Rahman Baba, Syed Mir Anwar Shah of Tirah, Baba Bulleh Shah, Sachal Sar Mast, Shah Abdul Lateef, Moin Ud Din Chishti— whose only message was love, peace and tolerance—should be reflected in the content of school and college curricula more than hadiths (Prophet’s sayings) and Ayahs (verses of the Holy Quran) about Jihad and Qital (killing).

Committing acts of violence is a learned behavior. Perpetrators are not inherently bad people. They have been living in a society where violence has become the norm. The Cure Violence approach suggests communities and regions which share boundaries with conflict areas, and countries or communities are more vulnerable to be infected by epidemics of violence. Cure Violence offers a holistic approach to building community allies working for deep and sustainable change.

Zaheer Abbas Maseed is a civil society activist from Pakistan. Currently pursuing a leadership program at the McCain Institute for International Leadership, he works with Cure Violence in their Safe Streets Program overseen by the Health Department of Baltimore, Maryland. He belongs to Waziristan, the tribal area of Pakistan. A version of this article appears on the McCain’s Institute’s blog, http://cureviolence.org/post/combatting-the-contagion-of-violence-in-pakistan 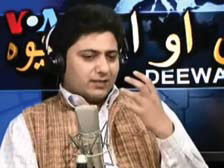 When he served as coordinator of MenEngage Pakistan from 2011 to 2013, Zaheer Abbas Maseed cultivated his passions for eliminating violence and studying masculinities. Now partnering with Cure Violence, Zaheer is working to adapt their models of community-based intervention to dismantle systematic violence back home in Pakistan.

“Back in my school days, when there was a fight among my peers, I would be tasked to look after the bags during the conflict,” Zaheer jokes with a stifled grin. “I wasn’t too strong so they wouldn’t have trusted me to protect myself.” Tongue in cheek, Zaheer notes that such violence may seem innocuous before it is understood as a pattern and even a way of life. After all, not only were boys exposed to violence at a young age, but they are also expected to participate, beyond the schoolyard and as members of their communities.

What was it like for Zaheer to grow up in rural Pakistan, where intertribal conflicts have claimed the lives of his classmates and the near-destruction of his village? In a word: suffocating. “Boys admired the combatants,” Zaheer recalls. It seemed inevitable that one day, at the ages of 15 or 16, they too would be expected to fight. This enormous pressure carved a narrow pathway for manhood, leaving boys little option other than resorting to using weapons as their fathers had before them.

It is in this way, Zaheer says, that we can observe the intersection between violence and gender. “It’s a man’s job to protect,” he explains. “If there’s some outside group coming into your area with intent to harm your family members or your property and business, you have to be ready to push back and retaliate.” While men are expected and rewarded for perpetuating violence, women are taught to obediently accept the status quo, despite their stake in ending the conflict. Zaheer laments the minimal role women are permitted to play in their communities, a generational silence maintained through child marriages and educational inequalities. Both men and women have to buck age-old customs to break free of their respective roles.

Yet challenging community norms that tolerate violence is exactly what Zaheer intends to do. During his training in Baltimore, Zaheer has learned to treat violence as a type of sickness, one that must be tackled through community-based public health intervention rather than individual incarceration. Zaheer has also piloted a series of training programs on gender, masculinities and violence with the staff at Baltimore’s Safe Streets Program. “These projects are necessary,” he says, “because at the same time we dismantle cycles of violence we must also address cycles of violent masculinities.”

Drawing on his work with MenEngage Pakistan—where he helped organize the first symposium in Pakistan to address the mainstreaming of masculinity studies into academia—Zaheer hopes to spark honest dialogue among men. Such an effort would create a platform for ex-warriors to share the consequences of violence, holding themselves and other men accountable to challenge violent masculinities.