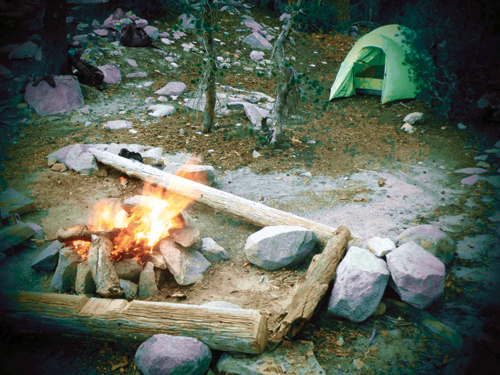 Rain was gently falling overhead; clouds obscured the stars. I was safe and dry in my son Jonah’s tent. I turned off the flashlight and dozed. I was sleeping a parent’s weekend sleep—one ear open waiting for his safe return. Old habits die hard; I needn’t have been so vigilant. He had only gone in search of cell service to call his girlfriend to say goodnight; he was years past high school curfews.

Jonah is our youngest and had recently finished college. As a graduation present we were spending the weekend at a writing workshop at a conference center and camp we both have a long history with and deeply love. We hadn’t done something like this for some time—just the two of us going away for a few days—so the gift was as much for me as for him.

Fathers and mothers benefit from one-on-one time with their progeny, regardless of their age. Parenting adult children (Jonah has three older sisters in their late twenties and early thirties) isn’t as straightforward as raising younger kids. Hopefully, after a few decades on the job, we’ve learned to shift from the spread-the-peanut-butter-on-the-bread Mother/Father role to TC (trusted consultant) available 24/7. It’s a practice, though, learning to balance offering support with keeping hands off. I don’t always get it right. The weekend Jonah and I spent together afforded me plenty of opportunities to practice. I had to pay attention, knowing when it was time to lead and when it was time to follow in the beautiful, complicated father-son dance we’d been choreographing for more than two decades.

When he returned to the tent, unzipping the flap slowly so as not to wake me, I whispered a greeting. “Everything okay?” “Yeah, Dad. Everything’s great.”

Once he’d settled into his sleeping bag, we lay in the dark for a long time talking; my heart brimming with happiness. It was not about the content—rich and varied—it was about how comfortable we were, how relaxed, how intimate. For me, the weekend had been a success before it had barely begun. I slept deeply until a hard rain fell at first light.

As private and personal as these moments are, isn’t it better for men to talk about them with one another than bury them under the cloak of men’s silence? How else can we break free of our legacy of isolation, of too rarely sharing our feelings? How can we hope to transform our lives if we are stuck in our silos of individual invulnerability? How can fathers help raise sons to access their emotional lives if we aren’t willing to access ours?

Becoming a father, of course, isn’t necessary for every man to become a full adult, to find his way as a man. But even for those who aren’t fathers, there are plenty of occasions to mentor, to “uncle”—to access that part of ourselves that innately knows how to nurture. There’s a tenderness to fathering that gets lost in popular culture’s stick figure sketch—dad as good-natured bumbler. Happily, change is afoot; it’s time to quicken the pace.

As more men step forward to honor their roles as fathers, there’s an opportunity for even more of us to take the initiative to balance our private, personal approach to fathering with a more public, political one. Our underrepresented voices in the ongoing war against women, for example, is a case in point. It is an apt moment for fathers to organize as fathers on behalf of our wives, daughters and sisters—biological and otherwise. It’s a powerful time for fathers to embrace that enduring insight from the women’s movement: the personal is political. Rather than stand mute when old school men seek to impose their will on decisions that rightly belong to women, imagine campaigns that begin with “As a father, I…” The Fatherhood Brigade remains an underdeveloped force for social change.

After the weekend, Jonah went back to his house and garden and I returned to mine. If previous patterns prevailed, some days would pass before I’d hear from him. As difficult as it is going from total contact to no contact at all, it gave me a chance to reflect on our time together. In quiet moments throughout the weekend, whether attending the same workshop or sitting together at meals, I’d look over at him engaged in conversation and marvel at the man he has become.  Considerably more emotionally intelligent than I was in my early twenties, what I realized was this: In the father-son dance we’ve been practicing since he was a baby, we had learned more than just how to avoid stepping on each other’s toes. Now we were learning how to balance the space between leading and following.  That lesson, I realized, applies to all the others parts of my life—from my work with men to my relationships at home. In the space between leading and following is everything I need to know.

Dancing to Uncover Codes of a New “Maskulinity”