Can Men Be Feminists? 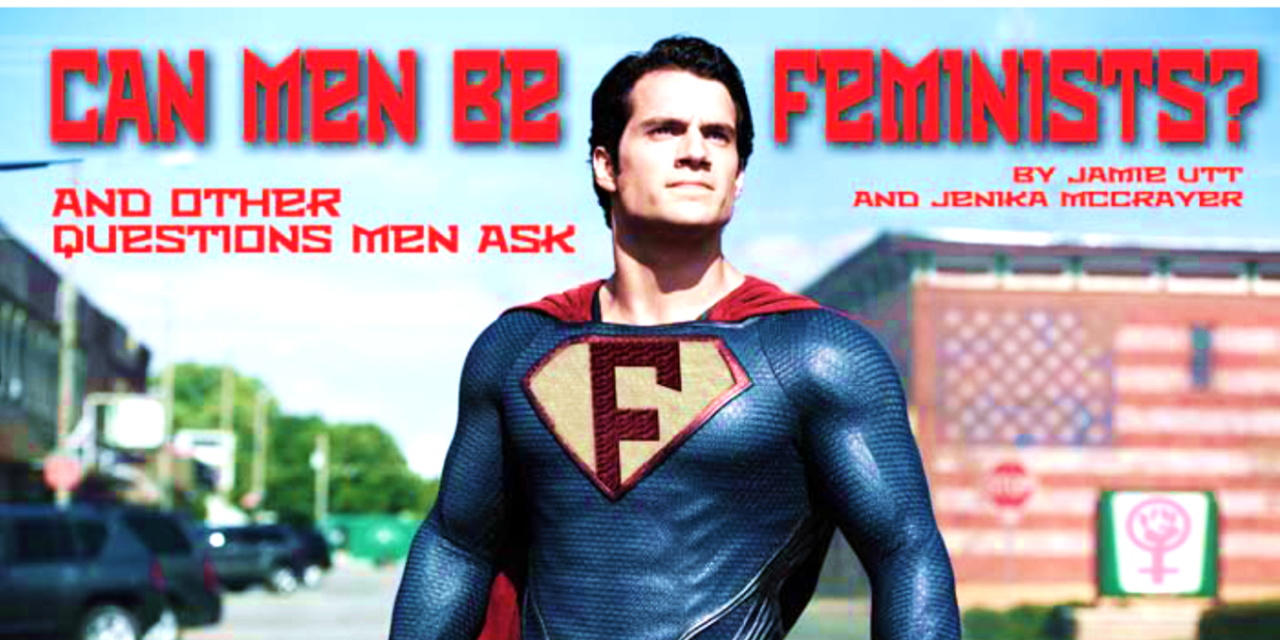 The website “Everyday Feminism” (everydayfeminism.com) explores the nuances of patriarchal oppression. Sometimes, though, they step back from the complexities of feminist thought to help readers better access, understand, and hopefully embrace feminism. The authors of “Can Men Be Feminists?” say in their work in feminist movements for justice, they get a lot of questions from cisgender men about what their place in feminism can and should be. Coupled with an awareness that many well-intentioned men are confused about the basic tenets of feminist movements, they wrote the article below as a way of answering men’s questions. “We come to this analysis from very different places as a black woman and a white man,” they say, noting “we both are cisgender, and as such, our perspectives are limiting.” In the piece, they say they worked to be inclusive of how feminism serves trans, non-binary, and gender non-conforming people. Their goal? To “demystify the feminist movement for cis men” and make it easier to open up a dialogue among men.

1. What Is Feminism? And Can Men Be Feminists?

To understand whether or not men can be feminist, men really need to understand what feminism actually is. But the tricky part is that feminism isn’t just one thing! Depending on who you’re in community with, feminism can be totally and completely different. So it’s important to be clear what we’re talking about when we say “feminism.” Though there are innumerable ways that people understand and express their feminism, we see the meaning of the term falling into two general concepts:

Option A: Feminism is a movement for and about women.

To some, feminists are women striving to better the lives of women. Feminism is a movement for gender equality socially, politically, and economically.

Each wave of feminism has expanded to include multiple groups of marginalized people in society, but its basis remains as a movement for and by women (including trans women). Men can surely have a role in this understanding of feminism, but men’s relationship to feminism would be better understood as an ally/solidarity relationship built on accountable work.

Option B: Feminism is a movement about gender justice.

Patriarchy hurts everyone, even if it hurts women and nonbinary people more and in profoundly different ways than cisgender men.

Feminism, then, is a movement to combat systemic and institutional oppression that disproportionately affects disenfranchised groups in our society with the main focus on women.

Thus, in this concept, feminism is a movement where people of all genders can be feminists if they’re willing to do the work to dismantle patriarchal oppression. So where men fit in feminism depends a lot on who they’re in community with and how communities understand the role of feminism in working for justice!

Patriarchy generally refers to systems and social norms that are, by and large, created by cisgender men for cisgender men and that, as a result, marginalize and oppress those who are not cis men (or those passing for cis men).

In some ways, it depends on who you ask.

To us, feminism is for everyone (so long as we’re all accountable to those marginalized people who ought to be in leadership).

There are different types of gender equality movements that also focus on intersections of race, ethnicity, and class, like womanism or Third World Feminism, but the current wave of feminism we participate in is seen as an intersectional and inclusive umbrella movement.

To some people, feminism is an inclusive, intersectional movement for social justice that centers marginalized and oppressed people in the work for freedom.

To others, its strictly aims to serve cisgender women, particularly focusing on the issues that affect white women.

To those people, feminism isn’t meant to be inclusive at all. For example, TERFs (trans exclusionary radical feminists) consider themselves feminists, but that’s not exactly an inclusive and intersectional antioppressive feminism when it seeks to actively advance the oppression of our transgender and gender non-conforming family. We work to inform the wider struggle for intersectional feminist justice, so our feminism centers women, trans folks, and non-binary people, particularly those most marginalized and oppressed in our society because of race, class, ability, religion, sexual identity, citizenship experience, or body size.

4. But Isn’t Feminism About Hating Men?

Feminists don’t hate men. We hate male privilege and the systems that create and reinscribe it. “Not all men” are awful, but all men benefit from male privilege. 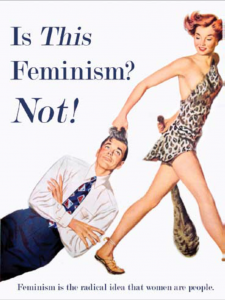 Notably, though, many men think feminists and feminism hates them because men are not centered or made to feel comfortable in their privilege. We need to be clear not to conflate men’s not being the center of a movement with that movement marginalizing or hating men.

This is the sticky part.

It’s not a man’s place to label himself as a feminist since at its core, feminism is for gaining equality for women. A woman you are close to can assign that label to you, but you have to earn it! And you have to keep earning it.

It’s important to incorporate feminist practice in your daily life—earning the label of feminist isn’t even half of the work. It’s a challenge to unlearn harmful patriarchal ideas, and it’s work you must do routinely in order to be a strong ally within feminist spaces.

In feminist spaces, it’s best for men to take the backseat and actively listen to women’s concerns while thinking of productive ways to challenge their own privilege while lending support to the movement.

Regardless of what you choose to call yourself, though, what really matters is how you act. Are you acting in ways that are accountable to people across difference and that advance and support feminist liberation?

Then don’t worry too much about the label and just do the work. [Editor’s Note: At Voice Male, we employ the term profeminist, believing that identifying as a feminist is reserved for women.]

6. As a Man, Why Would I Want to Be a Feminist or Hold Feminist Ideals?

Why not? As a man, you also benefit from feminist ideals!

Feminism is about getting rid of oppressive forces that hold women down and also make men adhere to restrictive norms and ideals.

Patriarchy wants you to be dominating, assertive, hyper-masculine, athletic, emotionless, and the breadwinner of a heteronormative family. That’s a lot of pressure!

Feminism seeks to eradicate patriarchal norms like these that have men bound and women perceived as inferior.

Perhaps more important, though, the people in our lives who don’t share our identity are hurt to greater and varying degrees by patriarchal oppression.

That should be enough for us to want to strive for an intersectional feminist understanding of justice. What brings many men to feminism in the first place is realizing how much our current society hurts those we love. And that empathetic concern should inform our own values!

7. Why Is There a Need for Women-Only Spaces? Isn’t Segregation Bad?

You know what’s awesome? Allowing for, encouraging, and protecting spaces for those who are marginalized in our wider society to meet in a space that offers reprieve from microaggressions and other enactments of oppression.

Thus, let’s stop using “segregation is bad” to break up protected spaces for women, people of Color, and other marginalized and oppressed people.

In our society, there are very few spaces where cisgender men aren’t welcomed, centered, and safe. That’s not true for people of other genders, so those spaces have to be created. Women-only spaces (and remember, when we say “women,” we are absolutely including trans women) are necessary because women can share their ideas and mobilize without the interference of someone who holds the privilege they are actively fighting against—and who may not fully understand how they benefit at the expense of women’s oppression.

It’s an uncomfortable experience to be confronted with your own privilege—and also your ignorance of oppressions others may face—so you must be willing to let go of control and allow for spaces where you are not centered or welcome. 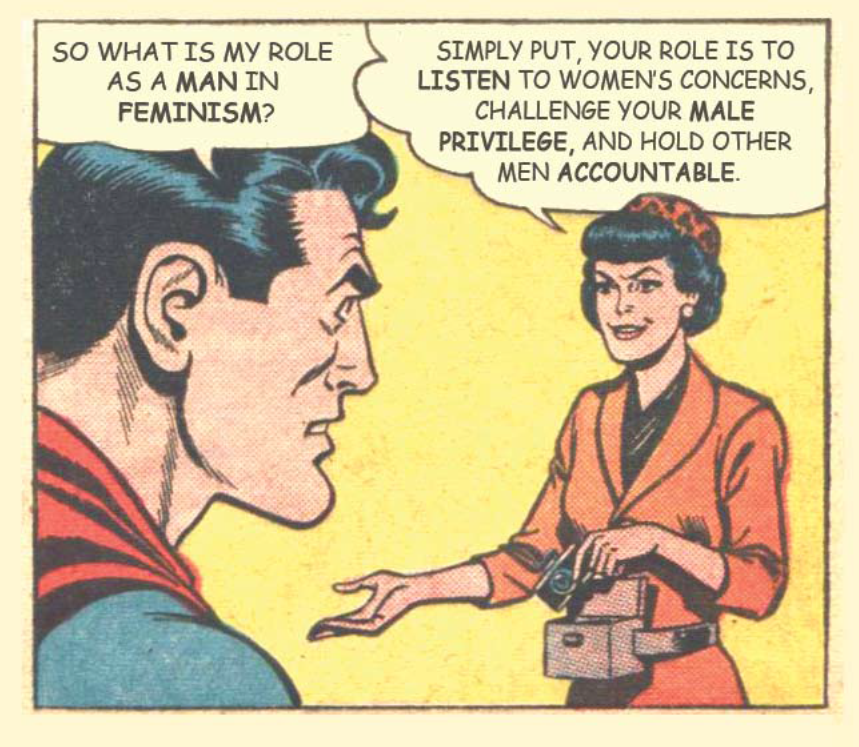 8. Should Feminist and Pro-Feminist Men Ever Meet or Do Work in Men-Only Spaces?

This one’s tricky because, in theory, yes, there should be spaces for men to do feminist work with other men where they can work through the hard stuff without relying on women to do this emotional labor for us. However, in reality, men have not always proven trustworthy when meeting in all-male groups to talk about gender.

You know… because of those few thousand years in Western society where men ruled in all-male spaces and treated women as chattel while killing anyone who didn’t fit within those tiny gender constructs. Thus, the trick is that men’s feminist groups need to exist in explicit accountability to people who don’t share their gender identity.

If you’re working in one of these spaces, be careful that the focus is on aiding and supporting women and not making your problems the center of discourse. There are lots of examples of this working well.

No… And yes. Men are not oppressed as men, though transgender men do often experience gender oppression.

Feminism is all about working on the intersections of identities to challenge societal oppression. And men do suffer and struggle within our patriarchal systems.

The patriarchal pressures put on men do lead to higher rates of suicide, and men are expected to go fight wars for the oligarchy’s empire when that’s not necessarily expected of women. But all of these things are rooted in violent patriarchy, which only furthers why men ought to strive to be in feminist solidarity and to live out feminist ideals.

We’re sure you’re sensing a theme here, but there’s no easy answer.

Simply put, your role is to listen to women’s concerns, challenge your male privilege, and hold other men accountable.

You can be an invaluable ally to the feminist movement because you can challenge yourself and others to acknowledge gender inequalities in our society, which will bring us one step closer to eradicating injustice. Perhaps the best way to answer this question, though, is to ask the feminist people in your life! Different people who are experiencing oppression want different things from those they consider allies.

Perhaps the best thing that men can do in feminism is to listen to the feminist cis women, transgender people, and non-binary people in our lives and take cues from their leadership about working for justice!

Jenika McCrayer is a contributing writer for Everyday Feminism, and is pursuing an MA in women and gender studies from the College of William and Mary. Follow her on Twitter @JenikaMc.

Jamie Utt is founder and director of Education at CivilSchools, a comprehensive bullying prevention program, a diversity and inclusion consultant, and sexual violence prevention educator based in Minneapolis, Minn. A contributing writer for Everyday Feminism, he blogs at Change from Within. Learn more about his work at jamieutt.com and follow him on Twitter @utt_jamie. 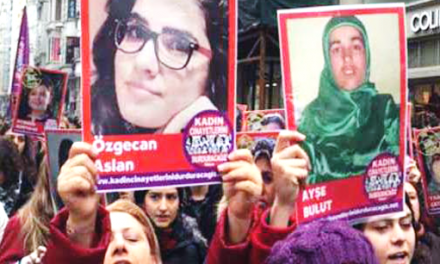 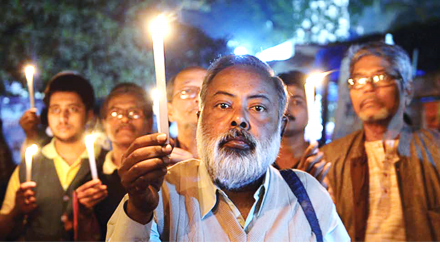