In the midst of the Black Lives Matter movement, I often wonder where are the black men mobilizing against sexual violence against black women? Have we hidden—like the biblical David—away from the eyes of our communities because we are secretly invested in rape culture? Are we afraid because we do not actually know what sexual violence looks like?

Or are we worried that we may look in the mirror and face the fact that we may also be harm-doers?

In July 2015, a group of about 10 black men joined together in the living room of Black Women’s Blueprint (www.blackwomensblue-print.org) in Brooklyn, N.Y., to discuss these things openly and

honestly, without restraint. We gathered because we wanted to discuss ways to dismantle the patriarchy inside of us. We pinpointed key ways to stand in support of black female survivors of sexual and intimate-partner violence. We also vowed to be conscientious of our socialization into a society that prizes misogyny and sexism, and strategized ways to move from theory to praxis and from talk to action.

According to a watchdog organization tracking police killings of people of color (http://mappingpoliceviolence.org), police killed at least 102 unarmed black people in 2015, nearly twice each week.

For more information, go to mappingpoliceviolence.org/unarmed.

We thought critically about what rape is, what consent looks like, how to stop street harassment and how to get real about the monsters deeply embedded in who we are as male-identified persons under patriarchy. We also agreed that this inner work is never-ending.

As I looked back on our meeting, I realized that we are doing similar work to our African forefathers during the nineteenth century. Historian Tera Hunter notes in To ’Joy My Freedom, a book about Southern Black women’s lives and labors after the Civil War, that black men across the South joined together and mobilized against the sadistic and utterly vile attacks against black women’s bodies by white racists overcome with rapacious lust.

In Savannah, Ga., there was the Sons of Benevolence, and in Mobile, Ala., there was the National Lincoln Association, which met regularly to map legal and social solutions to the problem of white-on-black rape. Black men led and sustained an anti-rape movement at the height of white supremacist Klan terror. Despite the widespread anti-black violence that ensued following the legal eradication of slavery as it had formerly been practiced, black men unapologetically mobilized against racialized rape and sexualized racism alongside black women.

These past several months have been quite overwhelming for black communities and families faced with fighting our own demons. Social media has been filled with post after post of individuals wrestling with the ill that is sexual violence. In the midst of these conversations were rape apologists or people—mainly black men—who stood firm—flat-footed, even—on behalf of accused rapist Bill Cosby, and even joked about the severity of R. Kelly’s alleged molestation of children, despite his chauvinistic behavior on a HuffPost Live segment last December (http://www.huffingtonpost.com/entry/watch-rkelly-walks-off-huff-post-live-set_us_56784911e4b06fa6887e193d). The wide-ranging lengths and leaps that black men have made to justify rape—a violation of one’s mind, body, soul and spirit that can never be just—is beyond distressing. Take, for example, the video in which Umar Johnson argues that the state is “taking down Cosby.” Though not applicable in Cosby’s case—despite Johnson’s opinion—the state’s assassination attempts on not just the bodies of black men but also on their characters are well-documented. Legal records, newspapers and cultural history bear witness to the ways that white supremacists depicted black sexuality as deviant and perverse. Pathologic engagements with black people’s bodies rendered black men and women sexual beasts.

Yet, in cacophonous contradiction, white women and men lusted after what Vincent Woodard calls “The Delectable Negro” in his 2014 so-named book, subtitled Human Consumption and the Homoeroticism Within US Slave Culture.

The Negro as a delicacy to be eaten is a metaphor that rings loudly in the heart of the white American soul. That is evidenced by white supremacists who continue to murder black people at astronomical rates (see sidebar above). So it makes sense, then, that conversations about the sexual violence that pervades our communities are fraught with tension, anger and accusations of racial traitorship.

Understanding the root, though, does not mean that it doesn’t need to be pulled out and destroyed. Understanding the root means knowing that state-sanctioned rapists who were sworn in “to protect and serve” black women, but who instead targeted them, are as reprehensible and violent as the police officers who killed Michael Brown, Tamir Rice, Oscar Grant and Sean Bell.

Understanding the root, the toxic root of white supremacist capitalist patriarchy, means that black men must always care about and advocate alongside black women and girls. We must care that

We must stand up as well when the predator is a black man with an iconic television show or hot albums. We must be there for her when she’s an 18-year-old black girl in Brooklyn, N.Y., allegedly gang-raped by five black teens who look like us (http://www.theroot. com/articles/culture/2016/01/rape_culture_black_girls_matter_in_ brownsville_too.html). No rape is negligible.

As Essex Hemphill once asked, “How eager are we to burn/ this threadbare masculinity/ this perpetual black suit that we have outgrown?” Though I think masculinity is inherently flawed, and will always be as long as we are invested in white colonial constructions of gender, as black men, we must wrestle with who we are as male-identified people and what that means for black women—cisgender, transgender and gender-nonconforming.

As black men in America, we are hurting, but black women are hurting, too. And it’s past time that we reckoned with the truth that they are often hurting because of us.

Ahmad Greene-Hayes is a writer, minister and scholar-activist who heads the Emerging Sons program at Black Women’s Blueprint. Follow him on Twitter (https://twittter.com/_brothag). This article first appeared in The Root (www.theroot. com), which fosters and advances conversations relevant to the black diaspora (http://www.theroot. com/articles/culture/2016/01/stand_with_her_black_men_as_anti_rape_activists.2.html).

Engaging All Men to Stand with All Women

In his article on the facing page (“Black Men as Anti-Rape Activists”), Ahmad Greene-Hayes argues passionately for black men to step up their efforts to prevent rape and sexual assault. He challenges men in the Black Lives Matter movement to ensure that black women’s lives are also a part of the lives that matter.

As a white activist and organizer, I found the article meaningful and challenging. I do not mean to use this space to critique men of color’s involvement (or lack thereof) in the movement to combat gender-based violence. Rather, I read his article as an opportunity to examine my role as a white male activist, and the role of “Own It,” a project of the Center for Women and Families in Louisville, Kentucky, as we continue to develop as a multiracial effort.

There is a tendency for men who become involved in efforts to prevent sexual and intimate partner violence to focus primarily on “our women”—that is, the women who are like us (i.e., white men tend to think about white women, black men tend to focus on black women). For me as a white man and in my role with the Own It Initiative, as a primarily white organization, Mr. Green-Hayes’s article has deep implications in terms of how I think about all women. Similarly, while Own It is growing as a multiracial organization, we’re still primarily white. As such, it seems that we have a critical responsibility to be sure that our efforts to prevent sexual and intimate partner violence include all women.

One of the themes of White Ribbon Kentuckiana, one of the main projects of the Own It Initiative, is empowering men to act as allies with women in ways that build alliances with other men. Most men, myself included, have knowledge and confidence to stand up for women in ways that confront, embarrass, or humiliate other men. We don’t have as much confidence in how to “stand up” for women in a way that builds an alliance with other men. This seems even more difficult when we cross lines of race or ethnicity.

We need to recognize and account for the ways that black and brown men tend to be held accountable in different ways from white men (black and brown men are more likely to be arrested, have a significantly higher conviction rate, and serve longer sentences than white men for the same or similar violent crimes). We can’t ignore this context in our efforts to engage and mobilize all men in the work of combating sexual and intimate partner violence. Further, there is a responsibility of white men involved in this work to overtly challenge these patterns.

To be effective, our efforts to engage and empower men to prevent sexual and intimate partner violence and promote gender respect must include understanding how those efforts are also efforts to combat racism and racist violence, and promote racial equality and racial respect.

Rus Ervin Funk has been actively working to engage men and boys for 30 years. He is currently the coordinator for male engagement at the Center for Women and Families in Louisville, Kentucky (where he facilitates the Own It Initiative; www.menownit.org). He is also a cofounder of and member of the steering committee of the North American Men Engage Network (menengage.org/regions/north-america/). He can be reached at rus.funk@cwfempower.org. A version of this article first appeared in the Own It e-newsletter. 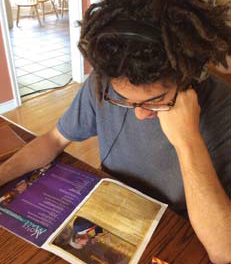