Many people first encountered Zach Wahls in 2011, when as a 19-year-old college student his stirring testimony at a public hearing before the Iowa House Judiciary Committee on a proposed constitutional amendment to ban gay marriage in his state was the most viewed video on YouTube that year. 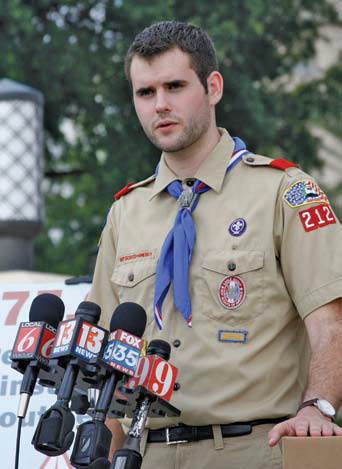 “Feminists and LGBTQ rights advocates have to work together.”

I’m straight and white; in many ways a stereotypically masculine bro-dude guy from Iowa—with one wrinkle: I have lesbian parents.

Over the last three and a half years, I’ve advocated for the interests of children and families like mine who have been raised by same-sex parents. My activism’s included promoting every adult’s freedom to marry, fighting workplace discrimination targeting gay people, and advocating for equality in the Boy Scouts of America. (In stereotypically bro-dudefrom- Iowa fashion, I am an Eagle Scout.) The time I’ve spent traveling and advocating has been the educational experience of a lifetime.

As I’ve answered a myriad of questions posed to me as a straight man being raised by two women, I’ve found myself examining aspects of my life that might have gone uninspected if I hadn’t spoken truth to power about my loving home and family. I’ve been particularly taken aback by the insidious effects straight men’s homophobia has on gay men, on women, even on other straight men—an utter, unmistakable fear that pervades the lives of so many American men today. It’s why, I believe, feminists and LGBTQ rights advocates have to work together.

I’m 23 now, and over these more than three and a half years, I’ve often found myself acting as an ambassador trying to bridge differences and diminish fear. How? Simply by telling my story, talking about my family, answering questions—often invasive—about my childhood and upbringing, and doing it all with a warm smile and a disarming joke at the ready.

I’ve spoken to students and community members at more than 150 colleges across the United States, from a dozen to hundreds. When attendance isn’t mandatory my audiences are almost always overwhelmingly female. I chalk this up to the fact that women are 25 percent more likely than men to say they have a close friend or family member who is gay. At these talks, men typically make up at most a fifth of the audience.

During such gatherings, maybe one or two men will say something during the Q&A, and one guy might come up after the lecture to chat further. However, when attendance is mandatory (for class, for extra credit, or a special program), the gender composition of the audience is much more balanced, and I hear from many men during and after the talk.

Sadly, a lot of men who support gay rights in private are hesitant to be seen at a public lecture for fear of being perceived as gay. “It’s not that I have a problem with gay people, I just don’t want anyone to think I’m gay,” is the usual line of reasoning such men offer. It also explains why you don’t see nearly as many straight guys at Pride parades and marches as polling about support for marriage equality suggests there should be. This phenomenon is also at the root of “Pause,” and “No homo,” said after something that may be taken as gay or endorsing homosexuality. (“Pause” is a phrase used in many urban communities of color to express an air of awkwardness after a pseudo-homosexual phrase is uttered. This is commonly followed by the phrase “No homo” to make clear the speaker is not gay.)

When guys do show up in force to my lectures, there are almost always questions about my upbringing—who taught me how to throw a baseball (my mom Jackie) or took me camping (my mom Terry, before she got sick) or taught me how to shave (the dad of one of my best friends). I have come to see this fascination with my upbringing as a desire to connect to it and to humanize me as someone with whom they can relate. By drawing parallels to their own childhoods and lives, guys who otherwise might have denigrated same-sex parenting can see that the differences are not so great—realizations they could only achieve by overcoming their fear to show up in the first place.

To be clear, I’m not talking about the kind of fear we experience when our safety is being threatened or, say, when a relationship is in peril. In order of magnitude this “fear” isn’t nearly as strong, and that’s part of what makes it so insidious: it’s fear that is often not even recognized as fear, wrapped as it is in bigotry.

It’s that same fear that makes a bro-dude wonder whether or not he should check out a lecture by a gay rights activist like me—someone with whom he more likely than not has an enormous amount in common. And, it’s the same fear that prevents him from forming meaningful, emotionally vulnerable friendships with other men. It’s the reason why odds are good in 15 years his closest male friends will be the husbands of his wife’s best friends. Think I’m kidding? More than three-quarters of the time, a man’s closest confidant will be a woman, precisely a person who will affirm his need for emotional connection rather than judge it, validate his vulnerability rather than criticize him for wanting it.

What I didn’t understand until recently is just how tied up this fear—read homophobia—is with society’s rampant sexism. “[M]en are pressed—from the time they’re very young— to disassociate from everything feminine,” Lisa Wade wrote in Slate in December 2013. “This imperative is incredibly limiting for them. Paradoxically, it makes men feel good because of a social agreement that masculine things are better than feminine things, but it’s not the same thing as freedom. It’s restrictive and dehumanizing. It’s oppression all dressed up as awesomeness. And it is part of why men have a hard time being friends.” While not identical issues, the casual homophobia that so many men still express is directly connected to deeply ingrained behavior to disassociate from the feminine. “No homo” isn’t just homophobic and doesn’t just hurt LGBTQ people. It deprives men of the chance to meaningfully connect with and confide in other men—and that’s not good for anyone.

I hope it’s getting better. As I travel and speak out, I see more than glimmers of progress. Over the summer, I had the chance to form a great peer group with some awesome new guy friends when we came together in a scholarship program. Most of us have gone separate ways, spread out all over the world now, but we keep in regular touch via GroupMe, a texting app that allows our group to easily communicate. We talk almost daily. While our topics, which largely consist of politics, fantasy football teams, current events, and our relationships with women, can’t be described as “emotionally meaningful”—at 140 characters and devoid of face-to-face interaction, how could they be?—the conversations are definitely the start of building a foundation for long-term fraternity. And you have to start somewhere.

The Courage of Love

My name is Zach Wahls. I’m a sixth-generation Iowan and an engineering student at the University of Iowa, and I was raised by two women. My biological mother Terry told her parents that she was pregnant, that the artificial insemination had worked, and they wouldn’t even acknowledge it. It actually wasn’t until I was born and they succumbed to my infantile cuteness that they broke down and told her that they were thrilled to have another grandson. Unfortunately, neither of them would live to see her marry her partner Jackie of fifteen years when they wed in 2009. My younger sister and only sibling was born in 1994. We actually have the same anonymous donor, so we’re full siblings, which is really cool for me. I guess the point is that my family really isn’t so different from any other Iowa family.

When I’m home, we go to church together. We eat dinner; we go on vacations. But, we have our hard times too; we get in fights. My mom, Terry, was diagnosed with multiple sclerosis in 2000. It is a devastating disease that put her in a wheelchair, so we’ve had our struggles. But we’re Iowans. We don’t expect anyone to solve our problems for us. We’ll fight our own battles. We just hope for equal and fair treatment for our government.

Being a student at the University of Iowa, the topic of same sex marriage comes up quite frequently in class discussions. The question always comes down to, “Can gays even raise kids?” And the conversation gets quiet for a moment, because most people don’t really have an answer. And then I raise my hand and say, “Well actually, I was raised by a gay couple, and I’m doing pretty well.” I score in the 99th percentile on the ACT. I’m an Eagle Scout. I own and operate my own small business. If I was your son, Mr. Chairman, I believe I’d make you very proud. I’m not so different from any of your children. My family really isn’t so different from yours. After all, your family doesn’t derive its sense of worth from being told by the state, “You’re married, congratulations!” The sense of family comes from the commitment we make to each other to work through the hard times so we can enjoy the good ones. It comes from the love that binds us. That’s what makes a family.

So what you’re voting for here is not to change us. It’s not to change our families, it’s to change how the law views us, how the law treats us. You are voting for the first time in the history of our state to codify discrimination into our constitution, a constitution that but for the proposed amendment is the least amended constitution in the United States of America. You are telling Iowans, “Some among you are second-class citizens who do not have the right to marry the person you love.” So will this vote affect my family? Would it affect yours? In the next two hours, I’m sure we’re going to hear a lot of testimony about how damaging having gay parents is on kids. But not once have I ever been confronted by an individual who realized independently I was raised by a gay couple. And you know why? Because the sexual orientation of my parents has had zero impact on the content of my character.

Zach Wahls is the nationally bestselling author of My Two Moms: Lessons of Love, Strength, and What Makes a Family, and the executive director of Scouts for Equality, the campaign to end discrimination in the Boy Scouts of America.