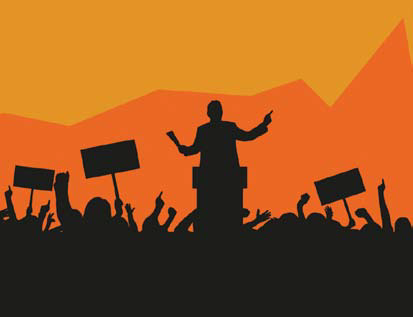 It’s getting harder for people in the United States to turn away from the sexism, racism, and inequality that is woven into the fabric of society. From the women’s march of 2017, to the ongoing protests against white supremacy in policing and other institutions, to the wider attention being paid to extreme disparities in wealth—the demand for justice intensifies.

What connects the analyses behind today’s different liberation movements? Do oppressive systems have common roots? How can we think in intersectional fashion about how injustice becomes so entrenched?

A productive place to start is the concept of hierarchy—one group’s claim to a right to exercise authority over another group.

The first hierarchy I thought about critically was patriarchy. At the core of a system of institutionalized male dominance is men’s assertion of the right to own or control women’s reproductive power and sexuality. This is rationalized by patriarchal men—whether conservative or liberal, whether their sexism is of the hostile or benevolent variety—as inevitable, a kind of law of nature. Male dominance is justified as a natural hierarchy.

Such hierarchy is, of course, not natural and not inevitable. Hierarchy is not the only organizing principle that has shaped human societies. In fact, before the development of agriculture about 10,000 years ago, institutionalized hierarchy was rare. This domination/subordination dynamic emerged on a large scale only after humans developed the idea that they could own and control land, plants, and animals, which was followed by men claiming ownership of, and asserting control over, women.

White supremacy—the claim of Europe and its offshoots (the United States, Canada, Australia, etc.) to own or control the resources and labor of the rest of the world—is no more natural than men’s claims on women’s bodies. The domination/subordination dynamic of white supremacy that defines so much of world history for the past 500 years, just like the longer running project of patriarchy, enriches some at great cost to many and further entrenches an unconscious acceptance of hierarchy.

That’s also the story of class hierarchy, which in the contemporary economy is rationalized through capitalist ideology that claims wealth disparities are necessary to create a productive society. The same applies to imperialism’s claim that powerful nation-states’ must exercise “leadership”—a polite synonym for domination—to organize the world’s politics and economics for the benefit of all.

It should not be surprising—given the relentlessness of pro-hierarchy propaganda on multiple fronts over centuries, even millennia—that many people come to accept that life will always be a competition in which the winner dominates, that there’s no hope for equity and fairness, that seeking control is “just the way people are.” In some sense, of course, people are that way and human nature is compatible with hierarchy—when we live in social systems that reward this dominating behavior, people can adapt and many will conform. But other systems have existed in the past, continue to exist on the margins in the present, and are possible in the future.

We should reject not only the injustice and suffering that comes from these hierarchical systems, but the underlying idea that domination/subordination is our fate, that there is no other way to organize societies except with hierarchy. The health of the human family—especially the fate of women, people of color, working and poor people, the developing world—depends on rejecting the claim that this domination/subordination dynamic is inevitable. Also at stake is the health of the planet, the integrity of the ecosystems on which our own lives depend. The assertion by some humans of a right to dominate the larger living world—the ideology at the core of the high-energy/high-technology industrial societies—is ecocidal and, therefore, suicidal.

What does this mean for real-life political decision-making in real time? In the short term, we might decide to prioritize one issue over others, depending on the contingencies of history. In the moment, we might focus on one struggle that demands attention because of immediate threats. But over the long haul, we must dismantle all of these hierarchical systems. And if there is to be a decent human future—perhaps if there is to be any human future at all—we have to transcend the idea that hierarchy is inevitable.