After the South Dakota Victory: Time for Men to Champion Reproductive Rights 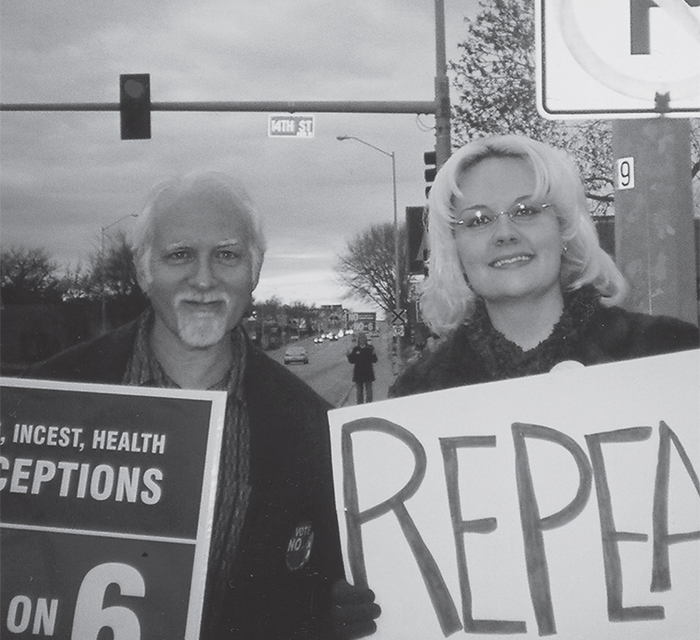 “I have a son, 18, and three daughters, all in their twenties. Imagine if even one parent in South Dakota had a daughter who’d been raped and became preg­nant. Must that family have to follow a state law that forbade the young woman from aborting the rapist’s child but instead compelled her to bear her assailant’s baby as the state’s way of responding to her assault? That’s a law I knew I had to challenge.”

I shared those sentiments, if not those exact words, numerous times last fall on the front steps of South Dakotans’ homes, where I spent several days before the November 7 midterm elections. I traveled around the state, working to overturn the most restric­tive abortion ban in the nation. Happily, we won, 55 percent to 45 percent. Even in a state often described as very conserva­tive and anti-choice, South Dakota voters apparently decided, “enough is enough.”

The celebrations are over; much work remains, in South Dakota and beyond. Those who favor upholding the protections the Supreme Court afforded women in Roe v. Wade nearly three and a half decades ago would be well advised to pay close attention to the strategic and well-orga­nized state-by-state battle currently being waged to restrict women’s reproductive rights and freedoms. The campaign is being coordinated and financed by a coalition of far-right political and religious institutions with close ties to the Republican Party and the Bush administration. To thwart the opposition’s efforts—currently being orga­nized in a dozen states—many organizers are considering ways to better engage men in the struggle.

Beyond the size of the victory, what was heartening about it was the energy the scores of volunteers from around the coun­try brought to the Campaign for Healthy Families, the statewide organizers. Arriving by plane, bus, van and car, volunteers fanned out across key South Dakota cities and towns to help get out the vote to repeal the law. College students—many able to attend thanks to the generosity of the American Civil Liberties Union (ACLU)— outnumbered middle-aged veteran activists, but everyone felt a spirit of enthusiasm and energy. Savvy, gritty, native South Dakotan men and women in their late twenties and early thirties were in key leadership posi­tions, orienting out-of-state volunteers to the conservative political opinions of many of the state’s residents, while underscoring that those very residents also had a strong aversion to governmental meddling in their personal lives.

On my first day, another volunteer and I hopped into one of a legion of rental cars organizers provided, and split up to canvass a well-to-do neighborhood in Sioux Falls, the state’s largest city (pop. 130,000). We had lists of houses to visit, urging residents to vote to repeal the ban the Republican-controlled state legislature had passed last winter and Republican governor Mike Rounds had signed into law March 6. Opponents’ signs outnumbered “our” signs by four or five to one, I estimated, raising concerns about our chances for success.

I soon learned why the final vote and the public show of support would be so out of alignment. I spoke with a doctor in his fifties, an arthritis specialist, who was initially wary when he opened his wide, ornate front door. After determining which side I represented, he shared some disturbing observations: He was afraid to display a lawn sign announcing his oppo­sition to the restrictive abortion law—his neighbors would do more than ostracize him, he said; he feared they would threaten him personally or vandalize his property. From the pulpit of his church, he said, he was being told to vote to uphold the ban; leaflets were handed out in church, he went on, and were being mailed from the church through the U.S. Postal Service (all viola­tions of the law). He said he felt afraid to complain since he couldn’t be assured of his anonymity. He felt encouraged, he said, that the Campaign for Healthy Families had people out canvassing, but then stopped short; we’d spoken long enough. He didn’t want to draw any undo attention from his neighbors for chatting too long.

“One South Dakota man said he was afraid to display a lawn sign announcing his opposition to the restrictive abortion law—his neighbors would do more than ostracize him; he feared they would threaten him personally or vandalize his property.”

A couple of days later I was walking through neighborhoods in Watertown, about 100 miles from Sioux Falls. It was late afternoon, I’d been out for more than four hours, the temperature was dropping and I was tired. A man who resembled a scary character from a children’s story—wart on a knobby, misshapen nose, shiny bald head, dark hair sprouting from large ears, lines creasing his forehead—opened the door to his brick corner house. I was wearing a col­orful Campaign for Healthy Families T-shirt that made plain where I stood on the state’s abortion ban. I felt tense as he sized me up, reading the T-shirt, studying my face. Should I turn on my heel before he blasts me? I asked myself. Before I could answer my own ques­tion, he thrust out a callused, meaty hand and began pumping mine up and down. Parting his lips wide to reveal a mouthful of misshapen teeth, he gripped my hand even tighter, leaned into my face, and bellowed, “I’M WITH YA!! I’M WITH YA!!” I jumped back and would have lost my balance had he not been squeezing my hand so tightly. Before I could fully recover, he let go, gave me thumbs up and said, “Good for you.”

In Madison, a day later, a woman in her thirties was chatting with a neighbor, lean­ing against an old sedan, smoking. She was on the other side of the debate and wanted me to know I was in the wrong. Even though we had been advised not to debate those whose votes we were unlikely to receive, it was difficult not to hear her out, or to share a thought or two of my own. Had she considered, I asked in a quiet voice, the psychological and emo­tional ramifications for a teenage girl who became pregnant after being the victim of incest from a relative (in addition to rape, there was no exception in the law for incest or the physical health of the mother). “God will take care of her” was her simple reply. “God will give her whatever strength she needs to bear the baby and to love the child.” While some young women might be able to do so, I allowed, what about those whose emotional or physical states were too fragile? “The Lord will take care of everything, and everyone,” she answered, extinguishing her cigarette in the driveway by the old car. Case closed. I knew it was time to move on.

The journey the other volunteers and I took into the heartland of our country underscored the deep divisions that exist in the United States, but also connected a net­work of allies ready to expand our movement for reproductive justice. I was impressed that among the South Dakotan volunteers—and staff—were a number of younger men. Men who shared with me how their parents had impressed upon them the importance of responsible sexual behavior and, in some cases, had imbued in them a genuine con­cern for the cause of reproductive rights. I was grateful for these conversations and felt encouraged by them.

Tired and hungry after a weekend of can­vassing, 120 of us crammed into one of the Campaign for Healthy Families offices for hot food and a debriefing. In the past two days, organizers told us, we had collectively visited nearly 14,000 households! A roar of astonished approval rang out; people put down their food to whoop and cheer. We felt a kinship in that moment, a shared sense of accomplishment. We felt what we had done had really mattered.

The South Dakota abortion rights story is just one of today’s human rights stories I hope more men will pay attention to in the days ahead. Abortion is a highly personal decision that women must freely make, without governmental interference. Still, men’s voices—as allies, as partners, as brothers, as fathers—can be a great asset in the chorus of support.

Looking back on my journey, I felt buoyed, witnessing men’s capacity to do the right thing, especially when the stakes are high. For the daughters of South Dakota, the stakes couldn’t have been any higher. In the days ahead, when similar abortion bans in Arkansas, Mississippi, Ohio, and elsewhere are being debated, men will have increased opportunities to engage in the conversation. Will we see a growing number of men who feel the same way men who worked in South Dakota felt? I hope so. I urge men in other states across the country—fathers and sons, brothers and uncles, cousins and neighbors—to stand up for all women and girls, not just their own wives, partners and daughters. To do so will demonstrate a kind of courage men of conscience are ready to take.

Rob Okun is the editor of Voice Male Magazine.