Abundance within Despair: The Ways We Are Responding to the Zimmerman Verdict – By Chris Rabb

A member of Voice Male’s national advisory board, Chris Rabb is a national thought leader at the intersection of entrepreneur-ship, politics, media, and social identity. He teaches social entrepreneurship at Temple University and is the author of Invisible Capital: How Unseen Forces Shape Entrepreneurial Opportunity (2010).
In this public moment our nation is experiencing in the wake of the Zimmerman acquittal, I have seen a range of responses that reflect the many constructive ways communities can deal with trauma, most notably, nonviolent protests. And there are many ways to protest.
In addition to public rallies where people are sharing their pain, anger, fear and hope collectively, we are also having dialogues and creating opportunities, vehicles and methods to address this travesty through various lenses based on how we see ourselves in the world. As a Black father who grew up in Chicago and is raising two young Black boys in Philadelphia, I cannot help to see this moment as another blow to the cloak of childhood innocence my sons may never experience by virtue of the bodies into which they were born.
I asked my 9 year old son who had just attended a rally in Love Park with his mother and 7 year old brother how he’s thinking about processing this moment as an artist. His response was an epiphany: “You’ve just given me an idea for something to draw!” My son was sad, angry and confused. But he’s also creative, and equally important, he knew he was, had the tools to leverage his gift and felt empowered to do so.
How we respond to these travesties is up to us. It need not be in one way — and shouldn’t be. And how we frame our actions is also well within our control amid the helplessness some may feel when injustice seems as present as the air we breathe.
I think in images. And in reflecting on how other individuals and groups are dealing with the Zimmerman verdict, I visualized the various topics that I’ve heard discussed and seen addressed. 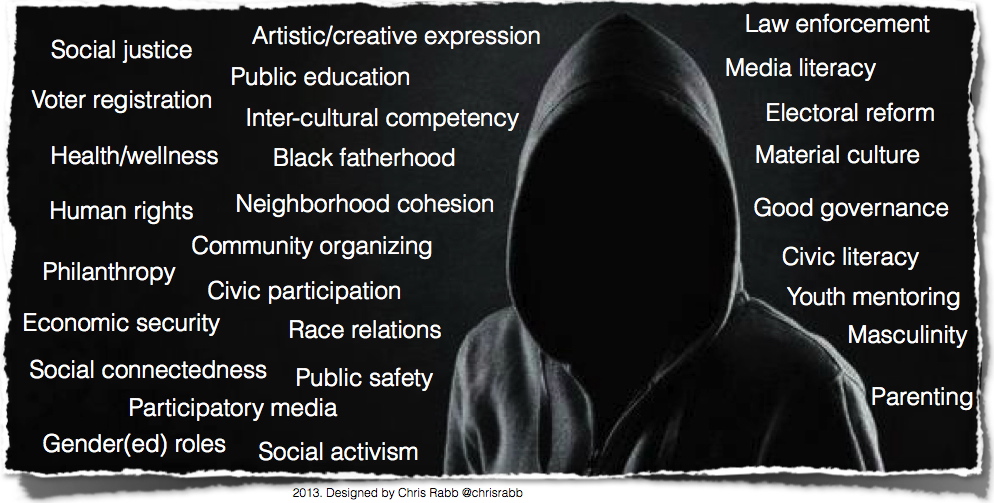 What I think is noteworthy is that as framed, none of these subjects displayed is inherently negative. That’s a choice. It’s a choice that starts from abundance and honoring the diversity of thought and action around this tragedy.
From catastrophe comes possibility, because both are forms of energy. What we do with it is up to us so that obstacles evolve into opportunity and anger transforms into love.
Love in the form of happiness was included in this country’s founding document. It is a universal right and the greatest form of wealth we will ever know in life as we seek to claim it in this battered nation of ours. How we embrace happiness — and justice — in the context of shared prosperity is what we are witnessing and participating in.
And the only wrong choice in this moment is to accept defeat and surrender our spirit, which when nurtured within community, is indomitable.