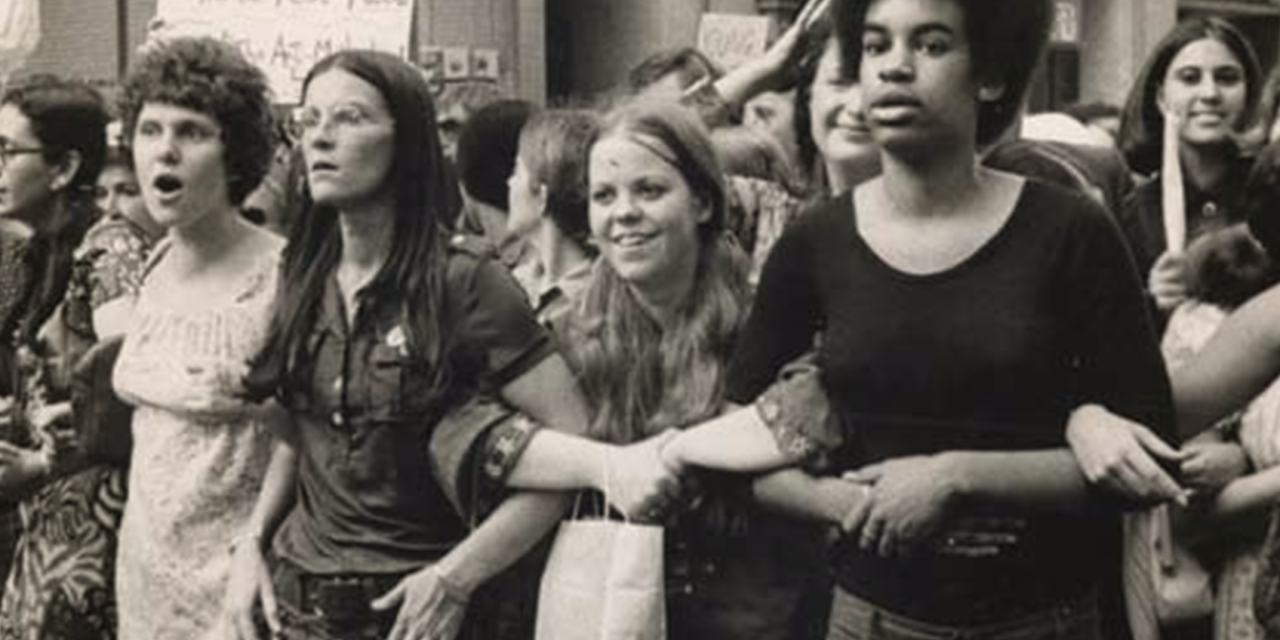 Imagine the scene: A rally in connection with antiwar protests at President Nixon’s inau-guration in 1969. Activist Marilyn Webb, then 26, on stage giving her first speech to a large crowd. What were described as “movement men” shouted her down, saying things like, “Take her off the stage and fuck her.” What had she been doing? Trying to raise “women’s issues” within the antiwar movement. But the group of men near the stage was having none of it. She told me later that fistfights broke out in the crowd in front of the stage and that march organizer Dave Dellinger told her and the other woman speaker, Shulie Firestone, to leave the stage, saying they were causing a riot.

The gruesome incident, in all its raw sexism, is portrayed in the provocative film She’s Beautiful When She’s Angry, a dynamic portrayal, through interviews and archival footage, of the rise of the independent women’s movement in the late 1960s and early ’70s.

Watching the film I was appalled. I was at that protest, but not at the particular event depicted. In fact, I hadn’t heard about it happening. When I wrote Marilyn she confirmed it was at the 1969 counter-inaugural protest. I told her how sorry I was. We had a nice email exchange. She repeated the point she made in her interview in the film—that it was that experience that convinced her and other women activists to form a separate women’s movement. “The rest is history” (or herstory, as it were).

Our email occurred as planning was under way for the first reunion of the antiwar movement. It would mark the 50th anniversary of the introduction of U.S. combat troops in Vietnam and the 40th anniversary of the end of U.S. direct military involvement in the war. The gathering, complete with workshops, speakers, folk music, and a march to the King Memorial, took place May 1 and 2, 2015, in Washington, D.C. (Marilyn had suggested showing the film at the conference, but it was not included, although there was a workshop on women in the movement.)

I couldn’t go to the conference without raising the issue of how “movement men” had treated women comrades back then. Not all men, but enough to cause women to feel they needed to organize independently. 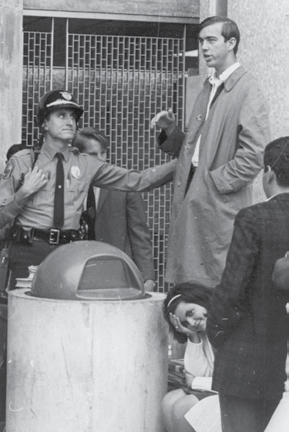 Author Tom Gardner, about to be arrested for attempting to give a speech against the Vietnam War at Miami-Dade Junior College, February 1967.

It wasn’t the first time I had thought about the connection between sexism and the movement. In fact, in 1970, in a paper I wrote on the history of the Southern Student Organizing Committee (SSOC), of which I had been “chairman,” I noted that it was the sexism of men in the movement—more than fraternal support—that led to the rise of the women’s movement in the South, as it had nation-ally. In one of Marilyn’s emails, she’d written: “I think today that the women’s movement is the single most successful result of that era—aside from the war ending—and has indeed caused a revolution in world culture.”

But it seemed to me that shouldn’t be the end of the story. How pitifully inadequate is it for men to take credit for starting a women’s movement by being sexist assholes? Gee, guys, good job! I felt then, and still feel, we have a lot of unfinished business; we need to examine how badly too many men acted toward women in those days, especially if we want to be allies and antisexism activists today. So I wrote an “Apologia” and passed it out at the conference.

Some took what I’d written seriously and applauded the effort. Others said, “Yes, we were young and stupid.” Two leading women activists said they appreciated the effort, but also pointed out that the times were complicated, and that we were all trying to grow up, conditioned by a sexist culture in the 1950s and ’60s, while also trying to negotiate relationships, and end racism and war. A very full plate destined to yield divergent tastes, both bitter and sweet.

We “movement men” assumed the right (if not the responsibility)
to be in the leadership.
We talked too much, leaving others struggling to get in a word. We failed to listen.
We interrupted, dismissed, ignored when women spoke, thus discouraging
women’s participation.
We failed to acknowledge the brilliance, the work, the creativity,
the energy, the leadership skills, and the commitment of women comrades,
and failed to encourage their efforts.
We failed to step back and promote women into leadership.
We expected domestic chores essential to conferences, meetings, social
gatherings, and living together would be done by women, leaving time for men to
do research, writing, speaking, organizing, etc.
We greeted complaints about sexism in our ranks—or in ourselves—
with jokes, thoughtless dismissal, or scary anger.
We dragged our knuckles and feet far too long in reading, discussing,
and considering the importance of the emerging feminist literature.
We judged our interest in working with women by their sexual attractiveness.
We confused “campus traveling” with sexual adventure,
or the sailor’s “girl in every port” approach to sexual relations.
We bought into society’s homophobia.
We confused hypermasculine, “egotesticle” chest thumping with
militant political strategy.
We saw issues like abortion, rape, domestic violence,
and unequal pay as “women’s issues”
not deserving of the attention of radical men
who had, after all, a world to save.
—Tom Gardner

Tom Gardner is a former journalist and activist in the Southern civil rights and anti-war movements, and a professor of communication at Westfield State University in Westfield, Mass. A longtime board member of the Men’s Resource Center for Change, he is on the Voice Male national advisory board. The film She’s Beautiful When She’s Angry is now avail-able via streaming through Netflix.