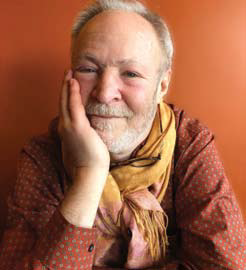 There is a struggle under way between light and shadow along the continuum of contemporary masculinity. At one end—the light—is the integrated healthy life of men like my friend and colleague Steve Trudel, a gifted counselor and social worker who was relational, engaged and loving. On the other end—the shadow in every sense— are men suffering from mascupathy—a disorder where traits such as aggression and invulnerability are exaggerated, and those of openness and empathy are repressed.

For three decades Steve facilitated groups for men acting abusively in their relationships. Year after year he worked with these men with such empathy, wisdom and steadfastness that if there were an Oscar for group facilitation, a shelf in his living room would have held more than one. He was 69 when he died in early August.

Steve was among the first men to recognize that engaging with abusive men was essential to curb domestic violence. In the early 1980s he went to San Francisco to learn how the Men Overcoming Violence (MOVE) program there ran batterer intervention groups. He brought home to the Men’s Resource Center in western Massachusetts a belief that it was possible for men to change.

Steve was the kind of man we champion in the pages of Voice Male: kind, compassionate and creative—a master gardener, chef, and a singer whose voice—both in the choruses in which he was a member, and the Saturday night music parties he so loved—was rich, deep, and pure. He stirred hearts, possessing the rare capacity to both hold the suffering of others and steer those in pain toward the light.

While I was writing this column, there had been another mass shooting—seven people murdered and 25 wounded in Midland and Odessa, Texas. Elsewhere in the magazine is an op-ed I wrote in the aftermath of the El Paso, Tex., and Dayton, Ohio, shootings (see page 15). It was the latest in a dozen versions I’ve written over the years; take your pick: Virginia Tech, Sandy Hook, Orlando, Las Vegas… Central to all of them is what is central—but maddeningly mostly ignored—in all mass shootings: the gender of the murderer. They are virtually always male and usually white. While I can’t know for sure if any of those killers might have been helped by counseling, I wish they could have been in a group with Steve.

Of course, not all men are so damaged that they believe the only way to deal with their hurt is to hurt themselves and/or others. Nevertheless, it is also true that men do hurt—ourselves and others— regularly: from abusing substances to abusing those we purport to cherish; from ignoring our health to ignoring our families. Too many of us lack the capacity to express feelings (besides anger) at any depth. We become numb not only to our own pain but also to the pain of others.

Steve understood all this at a personal level; his insights about his own life profoundly informed his counseling. His childhood family life was rocky; he used his own experience as a survivor to empathize with—but never to condone—the behavior of the men he counseled. He knew that it was by exploring our inner life that we could move from the darkness to the light. He took his own advice and was a member of the same men’s group for more than 40 years (see “When Two Generations of Men’s Groups Meet,” Fall 2017).

More than 25 years ago when I was learning how to lead groups for men acting abusively, I shadowed Steve every Wednesday night for months, paying close attention as I slowly found my voice. Imagine a room with a hodgepodge of furniture—a worn sofa, lumpy easy chairs, garage-sale lamps—peopled by a hodgepodge of men filling the wastebasket with empty water bottles and to-go coffee cups. Wounded men who had wounded others; angry men and nervous men; defiant men and skeptical men; men who wondered if or what they might possibly learn from the tall, twinklingeyed white gay guy with a goatee leading their group.

Steve worked the room like a master actor holding an audience spellbound. He knew when to use humor, when to employ compassionate confrontation, and always was on the lookout for a teachable moment. I watched more than once as the light bulb switched on for men in the group: flannel-shirted mechanics and white-collar managers; farmers in work boots and professors in sandals.

It is estimated Steve worked with more than a thousand men and held nearly every position in the Men’s Resource Center’s batterers’ program, Moving Forward. Near the end of his career, he served as the liaison for the female partners or ex-partners of men in the program, a position that heretofore had been exclusively held by a female staff member. That the women had no issue with a man as the program’s support person speaks volumes about Steve. He was not just any man. In gaining the trust of these brave women, he set a standard for all men who would be allies to women survivors. This is what is possible for manhood.

Today, when the glimmer of men’s consciousness brightens and dims like the sun and moon moving in and out from behind the clouds, we need more men to connect more dots—from recognizing their privilege (and being open about the challenge of relinquishing even some of it) to honestly acknowledging and accepting the implications of #MeToo (where men struggle to know how to respond to the truth of women’s experience). Progress toward the transformation of manhood may not be celebrated, but it is happening—painstakingly, slowly, steadily. Steve Trudel’s life was a powerful example.

While Steve would have dismissed the idea of being described as embodying a “new vision of manhood,” it’s irrefutable that his life offers much for us to contemplate, especially today when, as Thoreau said, “Most men lead lives of quiet desperation.” While we now know he did not add, “…and die with their song still inside them,” that might have been something Steve would have said—before inviting a circle of men to join with him to sing.