Up until June of this year, Greg Reese of Campton, Kentucky, proudly featured a Confederate flag magnet on the trunk of his car. But after a series of realizations, including the police killing of George Floyd, Reese removed the magnet and created a new decal—one that reads “Rednecks for Black Lives.” The bumper sticker he designed features a new, inclusive, and colorful, Southern pride flag, according to Robin Young, host of NPR’s Here and Now.

Although he says it took him a while to admit the problem, he now feels “disgust” at ever having flown the Confederate flag, Ms. Young wrote. “Some of us still are in the dark or want to stay in the dark about [the Confederate flag],” Reese says. “And it was an icon growing up as a child. You saw it everywhere.”

Young says he started a Facebook group to engage people to join the movement and also connected with Southern Crossroads, a group of self-described hillbilly rednecks from Kentucky, in order to educate himself and others.

“You can sit back and say, you know, ‘Hey, this ain’t my fight.’ And a lot of us did for a long time,” Reese said. “But I want to be one of those out there pulling people into it because it is their fight. It always has been our fight. South, North, white, Black, Brown, Latinos—everyone needs to get in this.”

Young wrote that Beth Howard, organizing director of Southern Crossroads, came up with the slogan Rednecks for Black Lives. Young reported that while the term “rednecks” originated in the mid-1800s as a derogatory description of poor southern farmers with sunburnt necks, by 1900 it was reclaimed by southerners. Records show that many called themselves “proud rednecks” and wore red scarves to political rallies.

The tradition was continued when a major labor uprising occurred in 1921, Howard writes. Multiracial coal miners in Appalachia wore red bandanas to indicate they were in favor of unionizing. The full force of the government was brought down on these miners in what became known as the Battle of Blair Mountain in West Virginia, Young wrote. Many of them died fighting for a union that never came to fruition. “I want us to reclaim the word rednecks,” Howard said. “And our history and that history is made up of people rising up together. That gives us hope—and we need a lot of hope right now.”

Howard, who grew up in a poor, working-class mining family in rural Kentucky, says she was often angry at living a life where “poor people are sacrificed for a few to be rich,” Young reported. She says society taught poor white people to divert blame onto people of color for their struggles instead of the real culprits—money-hungry billionaires, politicians and big businesses. But that narrative, for her, changed when she learned about the original rednecks’ struggle for justice. Young concluded, “As she writes, she’s now ‘showing up in defense of Black lives’ and invites other rednecks to do the same.”

Men who harbor toxic masculinity attitudes such as aggressiveness towards LGBT people are more likely to bully and harass others, a new study has revealed. Researchers from the University of Pittsburgh Medical Center’s Children’s Hospital and Promundo, an international gender equality organization working to end men’s violence, examined 3,600 opinions on masculinity from men, also learning these men tended to experience depression and suicidal thoughts.

Based on the “Man Box” Scale that Promundo-US developed to assess harmful practices and stereotypes, the scale relies on 15 items including themes about self-sufficiency, physical attractiveness, acting tough, hypersexuality, control, and rigid gender roles. Dr. Elizabeth Miller, chief of adolescent and young adult medicine at Children’s Hospital, explained that while there have been many discussions about harmful masculinity in the research community and media, there has been no standardized way to measure it.

Researchers used data from 3,600 men ages 18–30 collected in 2016 to find the association between having a high score on the Man Box Scale and violence. They also found that the higher the score, the more men would engage in bullying and sexual harassment. The study, published in August in Preventive Medicine, reveals how detrimental toxic beliefs about masculinities can affect men, their peers, families, and communities, said lead author Amber Hill, a fourth-year medical student from the University of Pittsburgh School of Medicine.

High school age males in Maine were three times more likely to carry a gun to school at least once in the previous year if they had received negative comments or been attacked based on either their sexual orientation or how feminine they seemed, a new study has found. While previous research has shown that bullied adolescents were more likely to bring weapons to school, the study from the University of Toronto aimed to identify specific types of bullying associated with that behavior, according to the researchers who collected answers from more than 3,500 Maine high school students. By doing so, they hoped to show how professionals and policymakers can decrease the likelihood of gun violence and improve relationships among kids. “These are concerning results and continue to show the negative impact of bullying victimization among young people,” said lead author Kyle T. Ganson, an assistant professor at the University of Toronto and a former Maine resident. “Both gender- and sexual orientation–based bullying are common among adolescent boys, which we found may increase the likelihood of high-risk behaviors.”

The Movement for Black Lives (M4BL) honored Black trans, gender nonconforming, nonbinary and intersex people as leaders in movements for Black liberation during a webinar in August entitled, “End the War on Black Trans, GNC and Intersex People.” Among the Black trans women honored were Marsha P. Johnson, who was at the forefront of the Stonewall revolt in 1969, and Miss Major, who was incarcerated at the Attica (New York) prison months after an inmate uprising in 1971. Miss Major’s intersectional and abolitionist vision still guides our movements today.

“Black trans women and femmes have long been at the center of our movements, innovating from the margins and ensuring we all get free,” M4BL outreach strategist Mickey B. said. “Black trans, gender nonconforming, nonbinary and intersex people have had to get creative…to survive racism and white supremacy alongside ableism, transphobia, homophobia and gender-based violence. Our mandate for Black liberation insists we uplift the contributions of all of our Black freedom fighters,” Mickey B. said. “We cannot and will not allow white supremacy, ableism and misogyny to erase our vibrant history on the path to Black liberation.”

The Movement for Black Lives is committed to defending all Black lives and works “to deepen efforts to center a Black trans and queer feminist politics that fights for disability justice, reproductive justice and an end to all gender-based violence.” M4BL.org

Iranian women took to Twitter not long ago to break years of silence by sharing detailed accounts of sexual abuse, naming alleged abusers with hashtags such as #rape, #assault and #NoMeansNo. Alleged abusers include well-connected and famous Iranians—star athletes, media and arts figures, doctors, and educators.

The online movement was sparked by an early August tweet by an anonymous user explaining how one could convince a woman to engage in sexual activity on a first date by kissing her without asking and pretending it was because “her beauty was striking.” (Facing a huge backlash, the user deactivated his account.) The unprecedented support of Twitter users encouraged not just women but also men to reveal the names of their alleged perpetrators, which even led to uncovering some individuals accused of serial abuse.

In one case, multiple women said they’d similarly been raped after being drugged with a perpetrator’s homemade wine. Tehran police arrested that suspect and called for others who had possibly been assaulted by this person to come forward, according to a report by the Islamic Republic News Agency. Iranian media began covering the issue soon after the police acknowledged the online movement by arresting the alleged serial rapist. As of early September the issue had not been covered on national television.

Some young men in the UK believe that feminism has gone too far in its pursuit of equality, according to a new report by the UK-based anti-extremism organization, HOPE Not Hate. The report, “Young People in the Time of COVID-19”, found half of the young men surveyed believe feminism “has gone too far and makes it harder for men to succeed.” Researchers surveyed more than 2,000 young men between 16 and 24 about their ideological beliefs during the COVID-19 pandemic. Only one fifth (21 percent) of the male participants did not agree that feminism had gone too far and less than half of male participants, 39 percent, believed it is a more dangerous time to be a woman than a man in Britain. Meanwhile, nearly one in five had “negative” views about feminists. HOPE Not Hate researchers attribute the anti-feminist perspective popular among younger millennial and Generation Z men to the growing far-right ideology seeking a foothold in the UK. “Men’s rights and anti-feminism are increasingly becoming a slippery road to the far right, appealing to young men feeling emasculated in an age of changing social norms,” according to the report. Founded in 2004, HOPE Not Hate advocates against racism and fascism, among other issues. 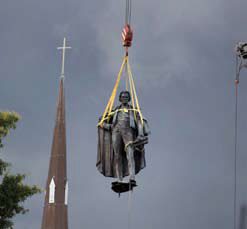