Eight organizations in six states, the District of Columbia, and Puerto Rico were awarded AIDS United’s demonstration grants to increase transgender leadership within organizations, in community planning bodies, and in local networks to aid the response to HIV.

Transgender women—especially transgender women of color—are more heavily affected by HIV than any other group in the US relative to population. Many barriers to good health face the transgender community, including violence and discrimination in housing, education and accessing health care. Often community leaders and policymakers are unaware of their plight. 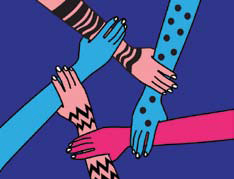 Using as a guide principles of Meaningful Involvement of People Living with HIV/ AIDS (MIPA), transgender individuals are involved at all levels of decision-making of this project. The initiative is designed to increase transgender leadership within organizations, community planning bodies, and networks. Specifically, it will:

Create a cohort of connected transgender leaders who support each other and network to improve their communities’ HIV outcomes.

The transgender community faces unique challenges in HIV care, compounded by racial and ethnic health disparities and a lack of culturally competent providers. Transgender leadership is essential to address the dire HIV epidemic in transgender communities, improve transgender health outcomes, and solidify transgender power in our society. To learn more, go to: www.aidsunited.org/. 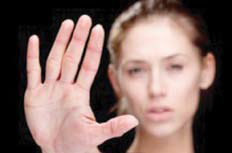 Despite longstanding and intense consent training, many straight men on college campuses are still doing poorly in gaining explicit consent from female sexual partners. Absent a clear and spoken, “No!” or demand to stop, young men use nonverbal cues and “presumed” behaviors to assure themselves that their partner is willfully participating.

In her paper “Moaning and Eye Contact: College Men’s Negotiations of Sexual Consent in Theory and in Practice,” University of Michigan doctoral student Nicole Bedera found that too often men don’t obtain verbal consent during sexual encounters. They use behavioral cues as they begin and continue sex with a female partner. “A lot of the guys will say, ‘I knew sex would happen because, well, we made eye contact.’ Or, ‘I knew sex would happen because she came to my room and she wasn’t wearing a bra’. Bedera explained. “It’s not that these signals and behaviors are isolated; the men were looking at the behaviors to support their belief that a woman wanted to have a sexual encounter.”

An unnerving finding Bedera uncovered is that the college men she interviewed believe that they are encouraged to continue by a woman’s moans. “Some men told me that when they heard a woman moaning, that was clear indication she was aroused and enjoying herself. But moaning only happens after sexual contact has begun. And moaning can also indicate pain. The men didn’t consider that.” Bedera also found that many of the men interviewed simply couldn’t articulate a definition of consent.

For a copy of the paper or to reach the study’s author, contact Johanna Olexy at the American Sociological Association, pubinfo (at) asanet.org. 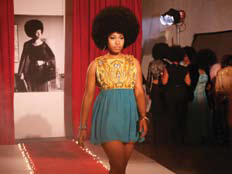 Still from the video “Afro-Chic” (2009–2010) by Carrie Mae Weems; courtesy of the artist and Jack Shainman Gallery, New York.

Their works examine cultural and personal identity, question stereotypes and social norms, and criticize the traditional relationship between gender and society.

The exhibit was created in association with the 17th Berkshire Conference on the History of Women, Genders, and Sexualities at Hofstra University last June.

Leading by tweeting is not working well for Donald Trump. The pushback against his Twitter-announced transgender military ban was so fierce that he soon started backpedaling, shirking responsibility for his reckless bigotry. He put the fate of transgender troops in the hands of Secretary of Defense Jim (Mad Dog) Mattis. 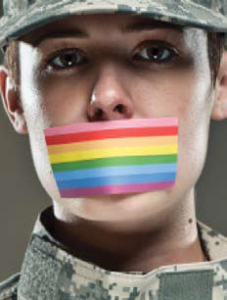 Trump’s direct assault on transgender people was, like most of his hateful decisions, haphazard and impulsive. In his unhinged Twitter announcement of the ban, Trump claimed that he arrived at his decision after “consultation with my generals and military experts,” even though the Pentagon press office reportedly “didn’t know anything about” his decision.

After Trump issued his ban against trans service members, Mattis said that transgender troops would continue to be allowed to serve in the military while the Pentagon completed a six-month study on the issue. Surprisingly, the White House gave Mattis wide discretion, including room to convince Trump to let transgender troops continue to serve.

Mattis has assembled a panel of experts to assess Trump’s claim that transgender troops might negatively affect readiness, cohesion or military spending. The panel wouldn’t be the first to look at the issue; last year the Pentagon commissioned a nonpartisan report that found that letting transgender troops serve would “cost little and have no significant impact on unit readiness.” The estimated cost to provide transgender troops with health services is about 0.0014 percent of Trump’s total defense budget proposal, significantly less than the cost to taxpayers of his trips to Mar-a-Lago this year.

Canadian prime minister Justin Trudeau will publicly apologize to the LGBTQ community by the end of the year for the government’s past treatment of gays and lesbians. The first step: creating an advisory council to craft the apology.

Calling for a wide-ranging, comprehensive “official state apology,” Prof. Gary Kinsman, who has been asked to appear before the council, said the Canadian government must take “responsibility for what they did and the problems they created in people’s lives.”

For more than four decades—from after World War II until the late 1980s— federal officials were trying “to identify [gay and lesbians] in public service and military who were seen as untrustworthy and at risk of blackmail by foreign powers,” according to reporter John Ibbitson, writing in Canada’s Globe and Mail.

Subject to interrogation, harassment, and dismissal, some of those targeted resigned from their positions rather than submit themselves, family, and friends to government repression.

In addition to the apology for more than 40 years of discriminating against gays and lesbians in public service, gay rights advocates are also calling for the government to expunge all records of any of their investigations to prevent them from being made public in the future. They also say the government must make public any documents that mandated purging gays and lesbians who were working in the public sector.

Among its other responsibilities, the advisory council will likely wrestle with the question of whether those whose careers in the military and public service were derailed because of their sexual orientation should receive financial redress for lost income and pensions.

The Trudeau government has made a high priority advancing the rights of sexual orientation minorities. It previously spearheaded successful legislation that protected from discrimination Canada’s transgender population. Additional laws are in the works aim to abolish outdated statutes and language that sanctions discrimination against the country’s LGBTQ population.

While some Canadians have complained they are suffering from apology fatigue from “a government that seems to be forever saying it’s sorry for its past treatment of minorities,” it is “never wrong to say you’re sorry,” says Kristopher Wells, a director of the Institute for Sexual Minority Studies at the University of Alberta. To ensure a healthy future, Wells says, “we have to remember and acknowledge the past.” 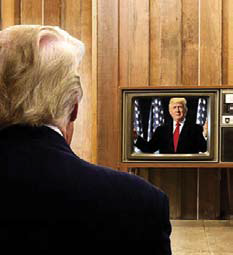 Donald Trump lives and breathes cable news, wrote The Nation’s Eric Alterman in early September. “Like so many illinformed, emotionally immature, and insecure older white men, the guy who has the most powerful and sensitive job on earth reportedly wastes five hours a day watching [the cable news network] Fox.” Alterman added that because Trump “possesses little actual knowledge about the real world outside his family and paid fluffers,” to him, “the lunatic conspiracy theories” at Fox “are the equivalent of Scripture.” For those who are not believers, it’s long past time to treat the questionably elected president like any other legitimate leader and Fox like an actual news network. “They are,” Alterman says, “respectively and collectively a metastasizing cancer on our body politic.”

How Alt-Right Women Live in a Misogynistic Movement

Days before the white nationalist rampage in Charlottesville, Va., Harper’s published a cover story about prominent women of the altright, including how they are working to recruit others into a movement that is misogynist at its very core.

In the piece, “The Rise of the Valkyries,” Seyward Darby, executive editor of The Atavist magazine, profiled Lana Lokteff, the “queen bee” of the alt-right, a woman David Duke described as a “harder-hitting” Ann Coulter with a “movie-star quality.” Lokteff finds like-minded women online and promotes them via Red Ice, a white nationalist media company she runs with her husband. 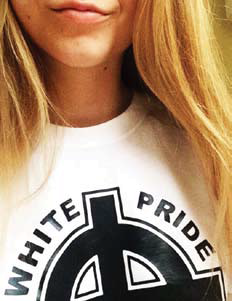 She told Darby how alt-right women detest feminism. “Many of them came to the alt-right as anti-feminists first,” Darby said. “Their reasons were myriad, but at base I think a lot of them felt ostracized by, angry with, or otherwise disappointed in feminism, which they would define in caricature: an ideology that celebrates man-hating, racially diverse, fat, ugly women demanding whatever they want from the world.”

The women Darby examined believe that “the progressive, feminist agenda castigates traditional wives and mothers and depicts the white man as public enemy number one. (They would call that real racism.” They argue that feminism, which they see as “the spawn of washed-up, Marxist, lesbian, and/or Jewish women in the early 1900s, has perverted the natural gender order by convincing women to be more like men and men to be more like women.”

The alt-right believes it’s fighting a war for the soul of Western civilization, Darby reported—“a grand sociopolitical battle to save the white race from destruction. All hands are needed on the frontlines promoting the cause and recruiting acolytes—including women.”

YouTube, Twitter, Gab, and other platforms are places to try and “harvest” more female voices and then promote them through Red Ice. “The alt-right is concerned with showing that it has strength and numbers,” Darby said. “Its shrewdest leaders realize that a critical piece of the project is proving that they aren’t just a bunch of slovenly white guys on their computers in their moms’ basements. They want to seem like smart, virile white men and smart, beautiful white women who’ve finally realized what’s in their best interests.”

While not highly organized like the Nazi party or the Ku Klux Klan in the 1920s—the moniker “alt-right” is an umbrella term for “a motley cluster of hate groups, Internet personalities, quasi-intellectuals, and trolls” who share a belief in the cause of white nationalism.

Where do men’s rights activists (MRAs) and men going their own way (MGTOW), the most virulent of Internet misogynists, fit in? They aren’t really alt-right, according to Lokteff. She told Darby that “to be alt-right, a man cannot disdain women; he must love and cherish them, because otherwise how will the white race reproduce and thrive?” Such an assertion raises all kinds of questions about who gets to claim the altright mantle, a term “forged in the depths of the Internet with minimal organization and maximum self-amplification.” Darby said she was sure that “men who identify as MGTOW and altright would not be thrilled to hear a woman tell them, “You’re not one of us.”’

—Michelle Legro, excerpted from her article in Longreads.com